Thanks /u/Orehnmadgib for pouring these for me.

Continuing on with a different type of review series, I had a bunch of Campbeltown samples, felt like I wanted to review more of them, and put two and two together and didn’t end up with three. Which is for the best, what with working with numbers every day.

Longrow is the big peat energy distillery of Campbeltown at the moment. Yes, Springbank has some peat to it, Glen Scotia can have some BBQ elements to it, and Kilkerran has very little peat, with Hazelburn having no peat, so being peat in town isn’t like being big peat on Islay.

But Campbeltown used to be the big peat place. The town smelled of peat all the time. The people were slippery and fish-like… wait, that may be another town. But there was a lot of peat. And maybe an Elder God.

So Longrow is continuing those old ideas. While being part of that new Campbeltown flavour country vibe.

Today we have two different Longrows. Both have white wines used. One with a full maturation, one with half. And again we see a single cask versus a multiple cask release.

Let’s see how these taste, shall we? 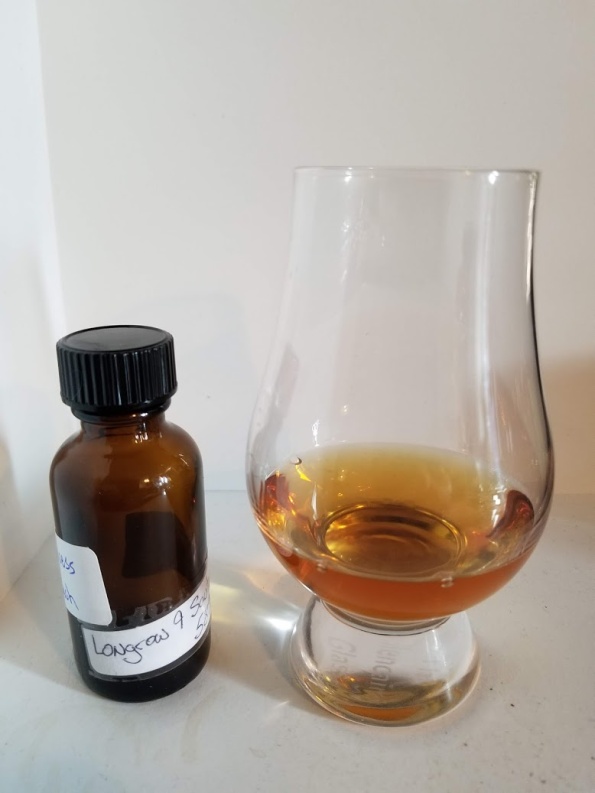 Chocolate and cinnamon can be quite polarizing for people. I enjoy it, so this is drawing me in. Think a chocolate malt type of beer and you have the nose on this (without water… in this whisky, not in the beer).

Water brings out more of the Sauternes cask influence. Which my bias is against. The nuttiness and the acid comes out with water like it’s Woodstock (the original one, not the on fire one in the 90s).

More cinnamon going on here. Nutty, and that lime pith element I get from ex-Sauternes whiskies is here again. Granted the peat element plays off of it all, and the water brings more of that cocoa.

All in all a tamer taste for a Longrow. Usually, that takes more time, so the cask was indeed fresh here.

Wait a second. A cocoa and cinnamon subtle dram just woke up and made some hot drinks for us to enjoy before we leave. The beer and apricot (which my whisky friends drool over) start this off, and water opens it up to spice, tannins, and even some creamy aspects.

Conclusion: The finish is where it’s at. This is like that one friend who makes passable food but knows their desserts inside and out. I’m typically that friend, BTW, so don’t think I have a friend like that. It’s me in each of the groups.

The nose promises an interesting combination though falls back to Sauternes influence with water. The taste is again driven by the wine. If the whisky continued there this would be a pass. However given that the finish decided to wake up, I was pleasantly surprised.

This is not an easy whisky to make. Heavy peated spirit mixed with a light, subtle Sauternes cask is madness, madness I tell you! But it turned out okay, and I’m happy to have had it.

Nice chocolate/cocoa/butter combination on the nose. Mix that with some spice and you’ve got me again. Some people may find that jarring. The whole sweet and savoury thing isn’t for everyone, no matter what some food snobs will tell you.

Water brings out simpler oak and pear notes. Was hoping for more.

Spicier here. It goes from butter and chocolate to butter and applies. Orr just apples. Like butter.

Finally getting some of the funk going on after water is added. It’s a bit all over the place. The oak has some bitter elements, and water brings out earth.

Drier finish. Starts with that dry aspect, this time with tart aspects amping up, and then the earth, spice, and even some nuttiness come out.

I’ve said it before and I’ll say it again: I didn’t run over those kids. Also, White Wine casks are super weird.

Conclusion: Odd combination of flavours. You have sweet and savoury that then goes to dry, sweet and earthy and then acidic, nutty, and sweet. It’s certainly unique. I enjoy these, but perhaps only because they are different. Pour this for a non-whisky-nerd and they may slap you.

Which would be an overreaction but hey, I don’t know your friends. This is certainly worth a try.