Numbers have a way of creeping up on you. Before I knew it, I was coming closer and closer to hitting 1,000 Scotch reviews.

And with all that, I have missed some distilleries. Some of these I can be given some latitude, what with them closing before I was born and all, but others I should know better. Could you believe I haven’t reviewed a Glenturret until now?

Let’s ignore that turret is in the name and that’s just an easy dick/ejaculation joke in and of itself, but it’s also the oldest distillery! I mean, it’s the oldest name there is. All of the equipment dates to 1959, taking with it the name that was bought. So for all of you who don’t agree with my review but have only had stuff from the 1800s from Glenturret, please don’t message me.

Glenturret is now home to the Famous Grouse Experience, as it’s owned by Edrington Group (70%) and William Grant & Sons (30%), who also owns Glenrothes and Macallan. Also, it’s one of the main components in said Blend. The distillery does release some OBs, but if you’ve been following me around with binoculars for any amount of time, you know I lean towards independently bottled versions more often than not.

It was during one of my purchases of multiple samples, mostly IBs, that I picked up a sample of Glenturret 35 That Boutique-y Company. One of my friends had been asking about Glenturret and is quite enamoured with them, so I thought I’d try some.

So where else should I start than a 35-year-old dram aged in an ex-sherry cask (I’m guessing given the number of bottles and the colour) for this Highland dram? So let’s aim and fire off in excitement over a new distillery to try! Open wide and make sure you don’t spit! 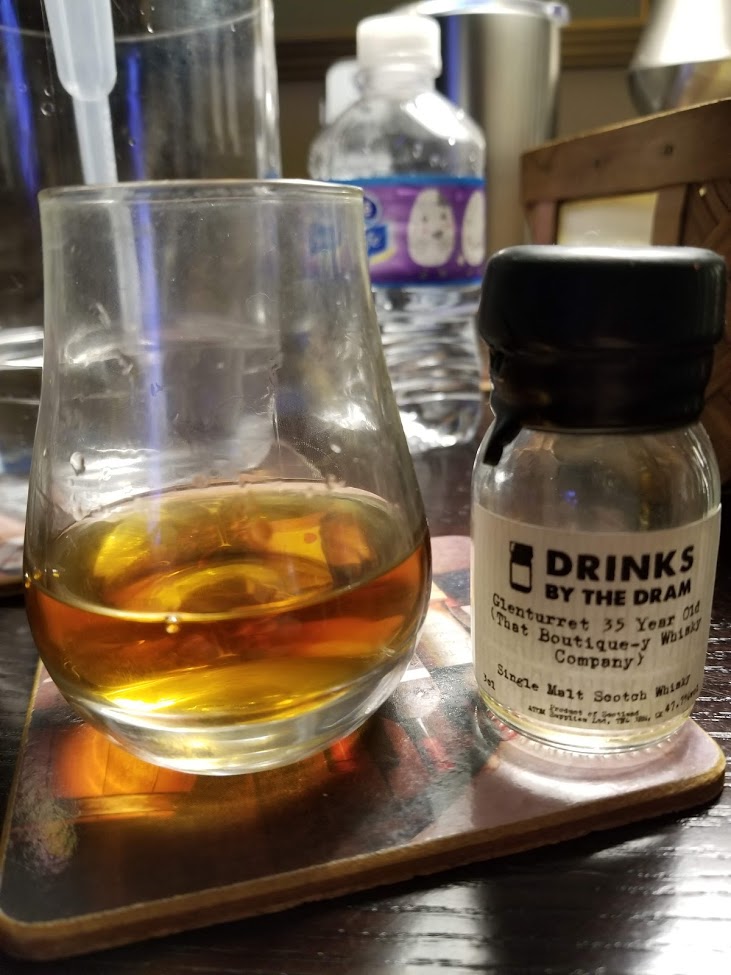 First couple notes, I’m a bit sad. Here I am, the most hyped up dram of /u/Throzen, a friend, and I’m just getting some stone fruits. Slowly, painfully so, there’s some spice, some citrus, some complexity.

But this is pulling teeth levels of patience. Water doesn’t help too much. I’m second guessing myself left, right, and centre. It’s certainly sweet, and there’s certainly something there.

Wow, what a difference between the nose and taste. Where the nose was shy and hidden, the taste is like a coked-up frat boy entering any room: Loud, to put it mildly. Spice, meaty, sweet, molasses. Nutty too.

Oddly water, just a bit, brings out the nectarine again. Doesn’t really improve with water though.

Here we go. If the taste was the kick down the door, the finish is the announcement that’s funny and pithy, like some sort of 80s action hero.

Conclusion: Shy nose, great flavour. If the nose is the least of your wants, then do I have a 35-year-old dram for you! Joking aside, this works on different spice ideas, has a meatiness, and even rings in some standard flavours better than other whiskies I’ve had.

It’s almost like Scotch delayed. The nose is barely a footnote, and then the taste is the nose, and the finish is the taste. I’ll definitely be hunting more Glenturrets to see if this is the norm or the Boutique-y Whisky Company ended up with a nutter.

Like cinnamon? Spices? Maybe some tropical aspects and meaty aspects? Then go for this. Don’t go for it if the nose is important. You’ll be let down.

One thought on “Glenturret 35 That Boutique-y Company”