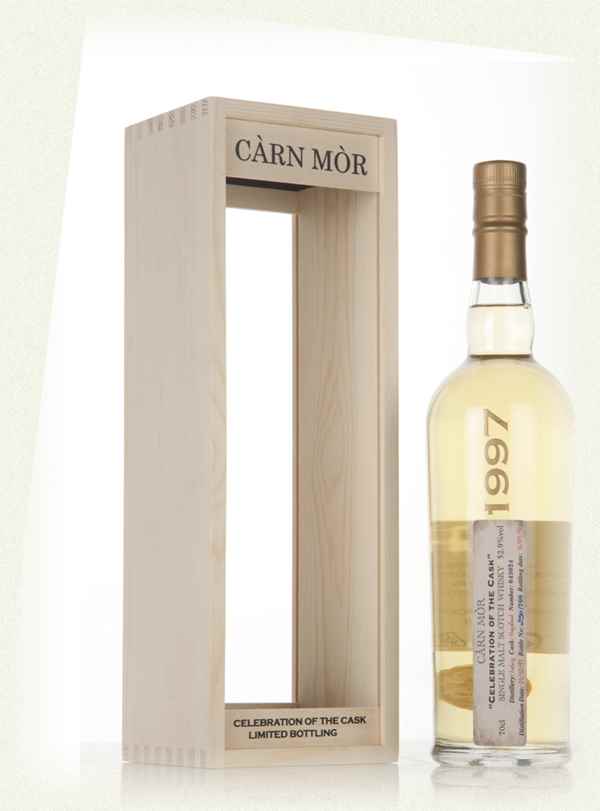 The past few years I’ve had more and more Ledaig. It’s pretty simple to see why: The whisky tastes good at a young age, isn’t from Islay but is peated, and my fellow whisky friends are big fans of it.

Thus when I had the chance for a friend to bring back a bottle of Ledaig 19 1997 Carn Mor Celebration of the Cask from Alberta, I jumped at the chance. And then they asked me to stop jumping on them because that’s not cool.

So we have an older Ledaig that was aged purely in ex-bourbon casks for 19 years brought out by Carn Mor for their 2nd tier independent bottle line. This is one of the older Ledaig I’ve ever tried. Also didn’t know too much about it, so a friend of mine split it with me in case all those years didn’t help it out.

So let’s see if I made a horrible mistake… you know, beyond all the others I did in my life that I personally judge them and feel generally horrible about.

Initial reaction to reading about this was to expect more of the peat would have relaxed. In fact it’s still quite strong. There’s that funk going on, but rather than being brash and potentially simple, this has more of a sweet smoke, creamy funk, and sweeter egginess.

So it’s elevated rather than more complex. Or maybe that’s more complex and I’m mixing my words. It’s been a long week, I hope I’m being clear.

More salt, less complexity on the taste. Like bacon? This is great for you. Wanted something similar to that nose in terms of complexity? Try next door, I hear they’re making Challah and Curry.

Big funky ass on the finish, as everyone prefers. If they disagree, they’re probably lying. Or maybe not, who am I to yuck your yum.

Drier, cinnamon, some cake and even the pear all slowly let you back down on the flavour.

Conclusion: So as I said on my last whisky review, there’s the idea of older drams, an expectation of complexity. This does that on the nose, and to some extent on the finish. Certainly, if you’re looking for a dram that takes peat and runs with that, this is an easy pick.

The only place I wasn’t totally on board was the taste, and that’s where the points go bye-bye. Yes, there’s a bunch of bacon, and I like bacon because I’m human, but beyond it falls a bit flat compared to the rest.

Why should you pick this up? Because you like peat and want to have more of it. Because you like funk and want more of that precise funk we actually want, like visiting a farm or eating various types of cheese.