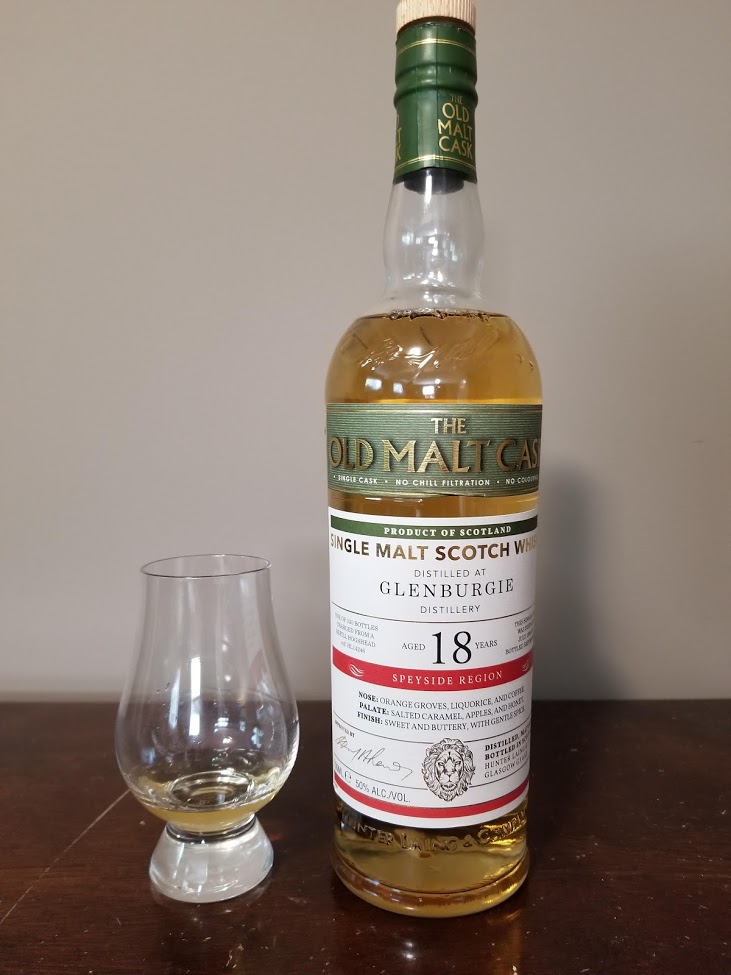 I’m a bit behind on my reviews. Which bothers no one more than myself.

A few months ago now the Toronto Whisky Society brought out a pair of selected whiskies. Last year there were people who asked a simple question: Could we have a less expensive version, please?

This wasn’t easy for me to swallow. Not that I’m super rich. I’m not, really. But the second we dropped the price, I was concerned that meant less strong, less choice casks, no bottle label choices, and really less control.

That all said there’s no reason to not try. So I was one of the people who did the tasting and helping of selecting if we’d move forward. Frankly, I was surprised Glenburgie 18 Old Malt Cask existed, let alone was something that we were able to source.

Why is that? Beyond my initial concerns, this is an ex-bourbon Glenburgie. My history with Glenburgie has sent me closer to the ex-sherry matured/finished ones. Add to that it’s less than cask strength. That said, it is 50%, and I’ve slowly learned that’s my prefered alcohol content level.

But maybe I was coerced or maybe I was the person who was off that day. So let’s see how I feel about it now that I have a bottle, shall we?

Price: All sold out

Initial standard apple/fruit, and then that ex-bourbon note of cinnamon and butter. Takes some time to open up, but isn’t doing anything wrong here. It is light through.

Think smelling apple turnover but after it’s cooled down. Or being far away from a bakery if you didn’t grow up on Norman Rockwell’s paint palette.

Less spicy than before, it goes from caramel to a harder anise and some charcoal/earth elements. Sweeter fruit with more red fruit than apple, and caramel and mint to round it all out.

It’s a bit disconnected from the nose, though also really easy to sip on an Autumn day.

This takes the spice of the taste and the sweeter aspect of the nose and really combines though two.

Whereas water helps the taste and nose open up, it has an amplifying effect on the raw, rough sugar aspects.

Conclusion: This is dangerously drinkable. Easy sipping, slightly better daily drinker. It does some of that spice really, really well. The apple pairs well there, and some of the sugar is welcome.

That said, my initial thought of missing some of that complexity is evident here. You have raw flavours, you have an unbalanced finish. Frankly, I can never see picking a whisky even minutely less quality than this one. This is where we should aim for, beyond this isn’t special.

Should you have bought this? I’m not sad I bought a bottle. Toronto Whisky Society only ended up with a portion of the cask, so at the right price, this is a decent dram to have, especially during the later parts of the year.