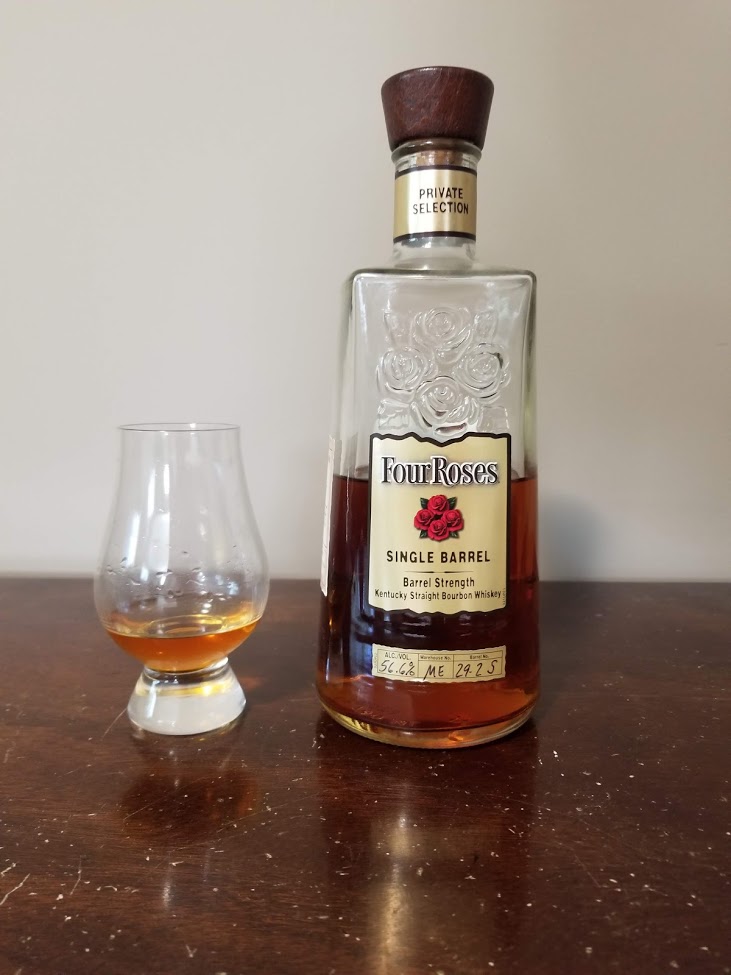 Thanks to /u/devoz for pouring me a sample of this. It’s good one of us is reviewing it.

We’ve all been here before, right? You are at a tasting, and someone has a Four Roses Private Selection. And you’re like “Hey, I already reviewed every single recipe. Why do another?”

Then someone mentions that they all have different ages, are in different warehouses, how different barrels react differently, how the wind blowing on a day in Taiwan somehow means that the US is now crazy… wait, I got off topic.

What I’m saying is that there’s always differences. And this particular one is 10 years old, which means it was old enough for /u/devoz to actually buy it. He’s into the older ones, you see. And not just GILFS.

Oh, and this is OESK, which means it was made at the Four Roses Distillery (O), uses Mashbill E (75% corn, 20% rye, and 5% malted barley), It’s a Straight Whiskey (S), and it uses yeast strain K (Slight Spice, who is also not in the upcoming tour). Got it? Great, let’s see how it tastes, shall we?

Price: I think this is sold out

Well, there’s the slight spice, right off the bat. Nice stone fruit to pair with that, and some bread and butter for you cinnamon bread fans.

Buttery. Big flavours, give it some time. Water brought out more butter, which since you’re human I assume you’ll enjoy.

Rich caramel. Any slight spice is out, and not just from the upcoming tour. Closer to a Highland whisky on this one. Lots of fruit.

Salt comes with water. I make sure people aren’t feeding me salt water.

Lots and lots of herbal notes. I’d say this was yeast F if I was having it blind. I’d be wrong, by the way, but I’d say it.

No real big spice, though it continues with the fruit, going drier with time.

Conclusion: An odd one. I’m starting to wonder if I wrote down the recipe correctly. I was drinking so I may check once I can again.

So would you buy this particular recipe? If you like your whisky with lots of fruit, dry finish, and even some spice (but not too much) then this is for you. Think of the most industrial made cinnamon buns out there, probably made for Walmart. If that makes you salivate, then this will work for you. Me? I like to triple the amount of cinnamon in most recipes.

So nice sipping whiskey. As usual, a nice Four Roses.