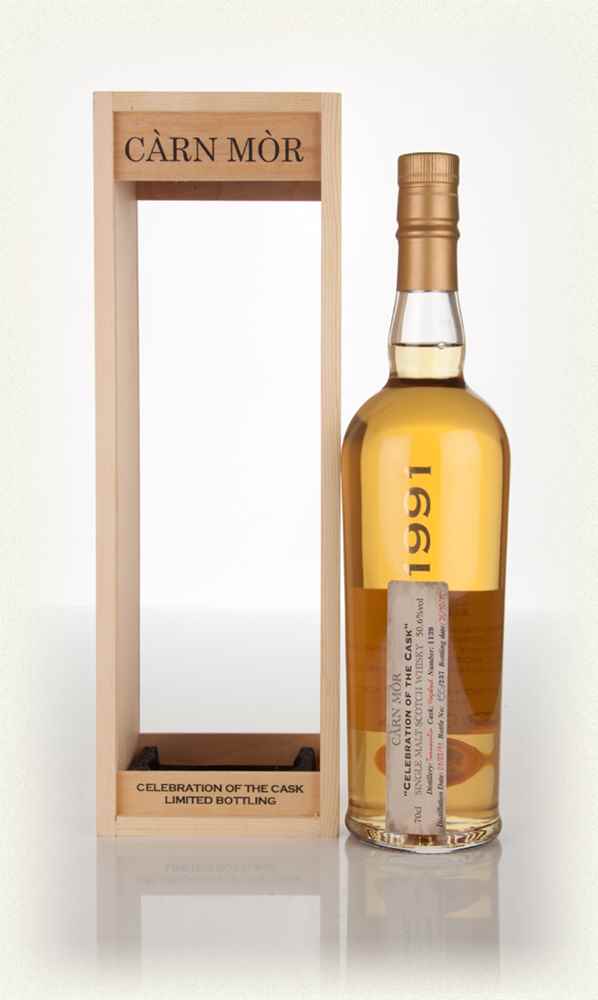 Tamnavulin, and Tammy to its friends, or friendemies, isn’t seen too often. It’s a fairly recent and modern distillery, being built between 1956 and 1966 and pumping out four million litres of alcohol a year.

That said, back in 1995 this workhorse distillery (made to produce more whisky for blenders) was mothballed, and only opened again in 2007. As far as an option to drink, you’ll have noticed it doesn’t show up too often. That’s again because it’s made to be blended, so they themselves aren’t holding it back too often, or sharing with IBs, or making their own releases

Thus it’s pretty cool to be trying out a whisky from a distillery I’ve only ever had one other time. Thus we have Tamnavulin 24 1991 Càrn Mòr Celebration of the Cask, and we’re all set.

But how does it taste? Let’s see, shall we?

Immediate creamy, tropical fruit with a backbone of cereal and oak. Very fruit forward. It takes a long, long time to get past any tropical fruit here.

Simpler nose, I’ll give it that there’s nothing rough about this. That said, at 24-years-old, you do end up expecting a bit more on the nose.

Water brings out some nuttiness, which elevates a bit.

Nutty and honey. Frankly, the finish wakes up the whole dram quite a bit. That nut forward (and not just for Tuesdays for me) mixed with tropical honey and spice.

So glad it works up.

Conclusion: Fruit forward and nutty. Good collection of flavours, but given the age, expected more. Quite light flavours at the end of the day. The finish is where it’s at. That’s where you start to feel like “oh, this is why they bottled this”.

Overall it’s not going to anger you to buy it. There’s very little in the way of “rough” notes. The nose smells like a lassie for Heaven’s sake, that’s pretty cool. But if you’re going to find others more complex.

So if you’re looking for a slight upgrade over a daily drinker or just an excuse to try a Tamnavulin, this will do it.