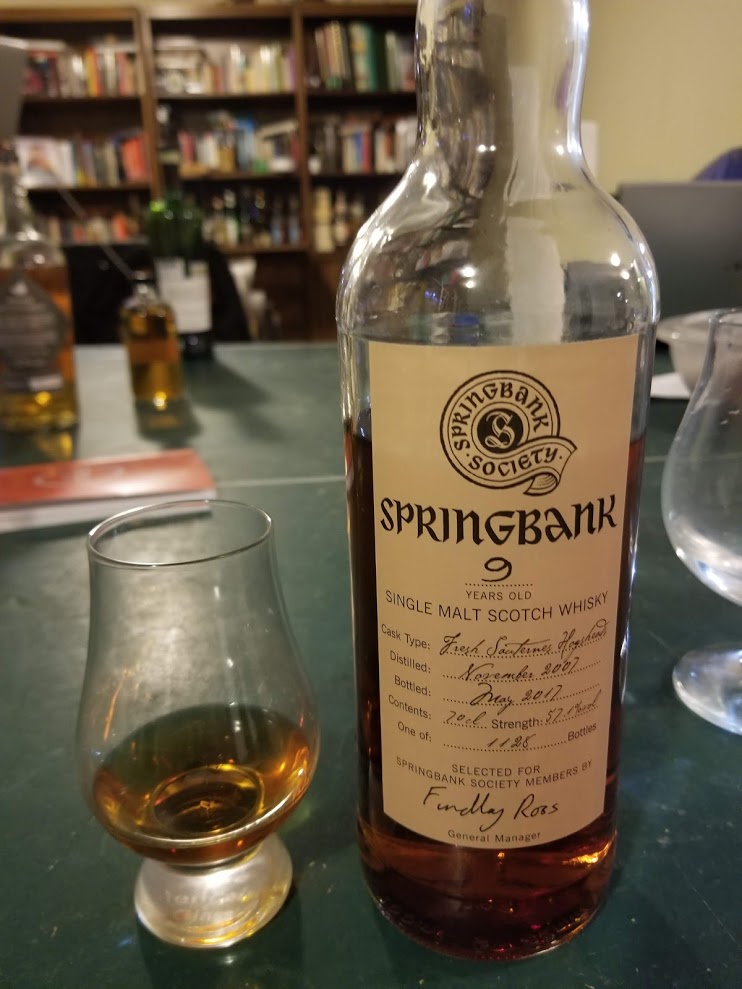 Thanks to /u/xile_ for pouring me a sample

“Hey, sorry I brought this. I know you don’t like Sauternes cask whiskies.”

I sigh. I said the wrong thing a long time ago and it’s going to haunt me forever.

You see, I’m not a fan of Sauternes casks in the way they are typically used. Finishes. A young whisky is poured in for less than two years, and the subtle honey, orange, and cereal notes are added… typically to a whisky that happens to have cereal and orange notes.

However, there have been times where I’ve had a full maturation Sauternes cask whisky or a second maturation one and been surprised. These amazing nutty notes came out.

So the question comes down: Do I hate the player or the game? And the answer I’ll say, as I say every time this comes up, is the same: I hate the game.

So when I was poured a sample of Springbank 9 2007 Springbank Society, I was excited. I originally considered buying a bottle myself.

This is a full maturation in Fresh Sauternes Hogsheads (hate those stale casks). That sounds cool.

Luckily someone else did. Let’s see if I automatically hate this, shall we?

The immediate difference from some other “finished” Sauternes casks. This is immediate acidity/tanginess with woody notes and brown sugar. Like if a sherry bomb got it’s act together and started going to night classes.

Oddly the Springbank malt is a bit lost here. Hope that doesn’t continue.

Ah, that nuttiness I was describing before. It’s almost like I planned it (I didn’t, I’m disorganized and these reviews are basically the equivalent of a million monkeys on a million typewriters).

Time gives more of a creamy, whisky related notes. Water brings out even more. This is a duo now, not Sauternes running the meeting or not putting it’s back against Springbank on Shark Tank…

Richer now, with more funky, Springbank influence notes. The whole thing comes across as some sort of non-chocolate S’mores. Which I assume some hipster milk bar will be serving any second now, and some idiot will talk about whispers about conservatives three minutes later.

Where was I? Oh, yeah, the finish is the malt shining. The whole thing benefits a huge amount from the funk and the cereal working its tail off in tandem with the Sauternes.

Conclusion: This is what you do with Sauternes casks, dammit. Seriously, if you’re going to do something with these casks, do it right. Take the time. You get more of that jammy, nutty, and well-developed lemon note.

Granted people stopped doing the same thing with Lowlands so I’m not surprised. This whole dram was a delight to sip on. Fruity and spicy. Is it going to blow your mind? No, but it’s way better than most other drams at this age, and perfect for the Winter/Autumn.

So try it before we all die of global warming is what I’m saying.

One thought on “Springbank 9 2007 Springbank Society”