Thanks to /u/throwboats for the first two drams!

There’s this weird thing I have with Octomore.

I’ve reviewed a lot of them. And admittedly, living in Ontario, the part of Canada that hates alcohol that isn’t beer or wine (officially, the people still like it, but they are heathens), I started late, only ever seeing the 6th batch before anything else.

So on some level, they are this rare whisky. The most peated whisky ever. These mysterious dark chambers with all that smoke, cocoa, and bacon fat I’d want. That’s “hard” to find. Heck, the .2 are only at airports, and as someone who hasn’t travelled in a minute, that makes it rarer.

However now I’m older and bitter, and perhaps a bit cranky. I’ve had many releases. I still have four bottles of my own of a whisky that ends a night after it’s drunk.

Not to mention this rare yearly release numbers over 12,000 bottles per release.

I’m not here to praise or bury Caesar, by the by. I’m here to understand him. Because he seems to be on fire.

So today I review four more of the elusive Bruichladdich Octomore samples I’ve yet to try. At this point, I’m really close to catching up. So I’m a bit of a hypocrite when it comes to saying that Bruichladdich isn’t for completionists, and here I am coming close to completing reviews for once facet of their business.

But enough about me looking back at myself and being the worst critic: Octomore is known for being the most peated malt. At first, it was simple: Each year the PPM (before distillation) increases, the stated age stays about 5 years, the casks were ex-bourbon. Some special wine editions came out, otherwise, Bruichladdich would lose their reputation.

Eventually, the ex-wine barrels became the norm, and then we got higher PPM with local barley. And then we ended up with Virgin Oak casks and different age statements.

Now let’s taste that progression, shall we? 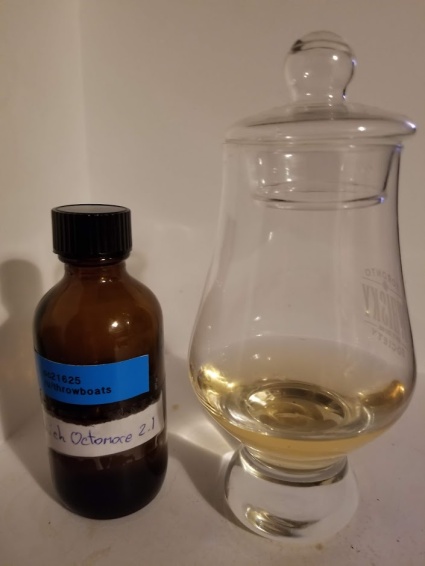 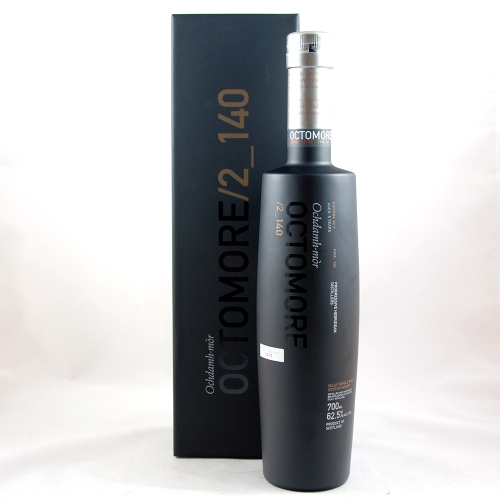 Lighter, more separated cocoa and earth on the nose. A lot of creosote and farmyard. This is a farmer’s dram.

Some lemon, some brine, we get it, you’re from an island, you use island peat. But wow that farmyard is there. This is visiting the pig farm as a kid.

More chocolate and farmy notes. Lots of fruit and happy herbal notes, like what you find when eating manure, as people will tell you I do. Meh, it’s a living.

The raspberry and chocolate notes play well, as well as the herbal notes, but again that farmyard is dominating.

Alright, a slight break with acid, more salt and more caramel. And then with some water/time, we’re right back to the farm, like a Fable who really should stop walking around like a fox.

Conclusion: Probably the most barnyard ever version of Octomore I’ve had. I came into this expecting bacon, not where bacon lives before it’s smoked, salted, and killed. So there’s a lot less salt/meat here, and a lot more of the cocoa/shortbread/sweets and that farmyard.

Pure and simple, if you like farmy notes, then 2.1 is it. Others went in a different direction, and personally, I prefer it. Seemed way too unbalanced to that side. 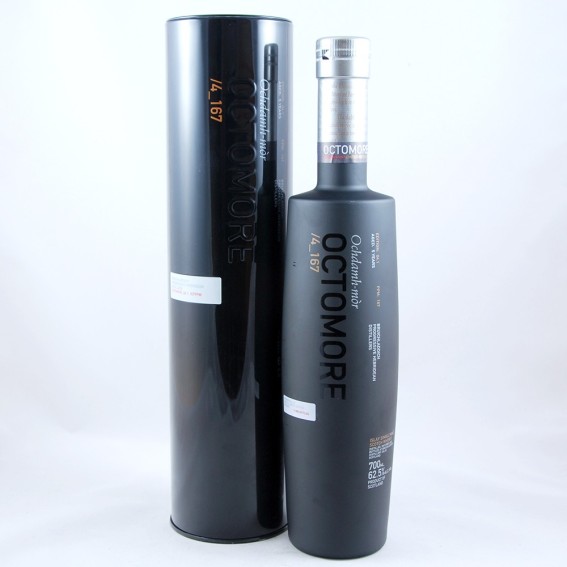 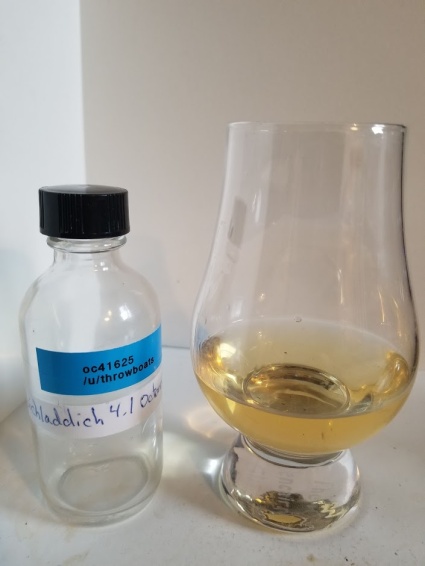 Price: Stay at the Auction!

Less on the nose than other Octomores have been. Lighter cookie flavours, more cocoa, some brine. There is that bacon, but you have to run for it.

Alright someone noted my request for pork. In the past, before I said it, as some sort of a waste of time travel.

So we have different pork and less creamy, but still some cocoa cookie notes and even some peach with water. Very sweet peach too.

Peat, Oreos, and no pork. Some smoke, but light, muted. Water brings out cereal and salt.

Conclusion: Muted. Probably the lightest, other than Octomore 10 First Edition, that I’ve had. I’m glad they went in a different direction after this and before this. Those time travellers, always seeing the future.

We’re nearly there for what I expect from Octomore in the X.1 series (please change that if there’s a new Bruichladdich by the time you read this that uses that somehow). We have pork, we have brine, we have Oreos.

However, it’s not all coming together this time. It’s whispering, which isn’t a good thing for Octomore. Octomore is a bullhorn that plays at full blast. When it tries to be light or subtle, it doesn’t have the age to do that. Was still nice to sip on something that tastes like stuff I love (Oreos go fast in my life). 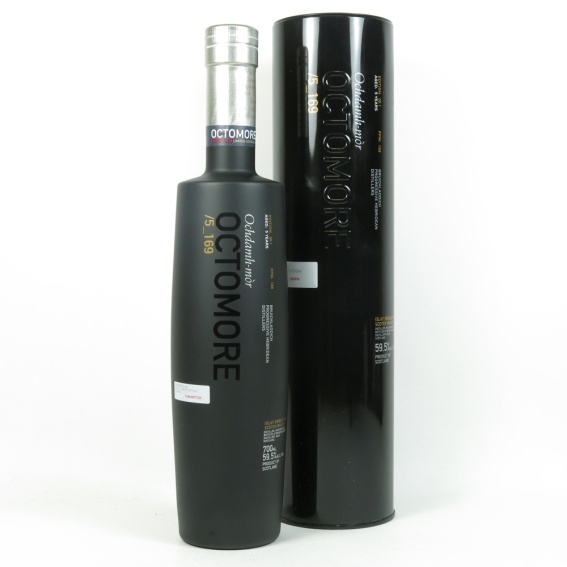 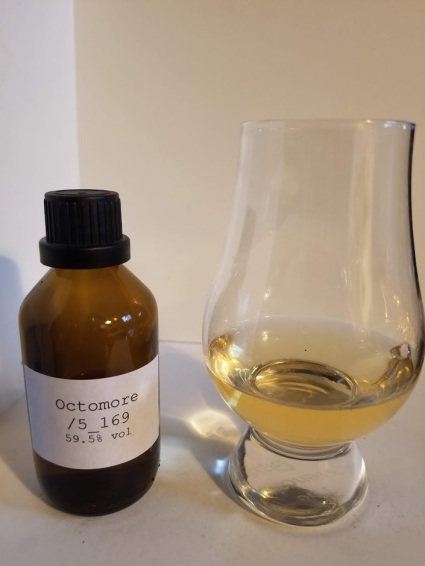 Thanks to /u/cake_my_day for this sample.

Price: Still at the Auction? Good, that’s where this is sold still

Alright, now we’re working. Oreos and pork cracklins, or fried pork skin to all the people missing out. Some nice peach and cinnamon, but then water hits you with an errant peach. A massive flying peach.

Dry, apple, spice, and chocolate. The chocolate takes over and you get this wonderful balance of dry, sweet, and earthy aspects. Nothing here is super developed save that, but it’s enough to bounce and flow with the other flavours.

More chocolate, less pork, some jerky to make up for it. To be honest, jerky is always a good secondary prize. Some more of that dry spice/earth/sweet aspects going on here.

Conclusion: Love the chocolate forward aspect. This is where it should be going because typically getting cocoa and chocolate from peat takes more years than Octomore has been around.

There are enough spice and smoke development here to be really nice. That all said it is a chocolate only dram. Probably could make a hell of a good Manhattan from this that would challenge most Chocolate Martinis. I missed some of that meat balance that others have had. However, I did prefer it over 2.1 which doubled down on animal faeces. 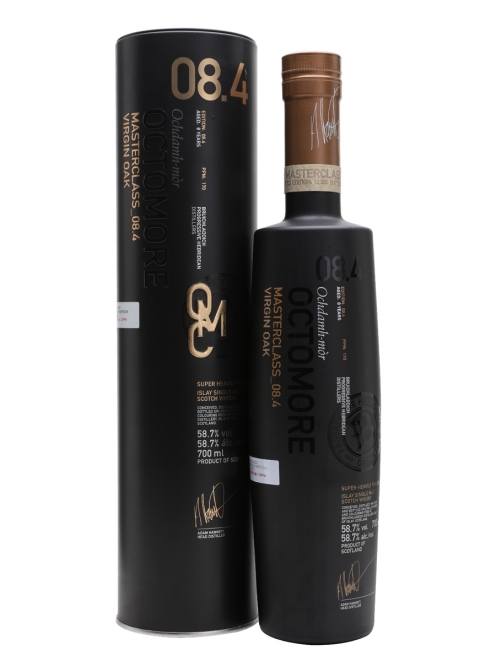 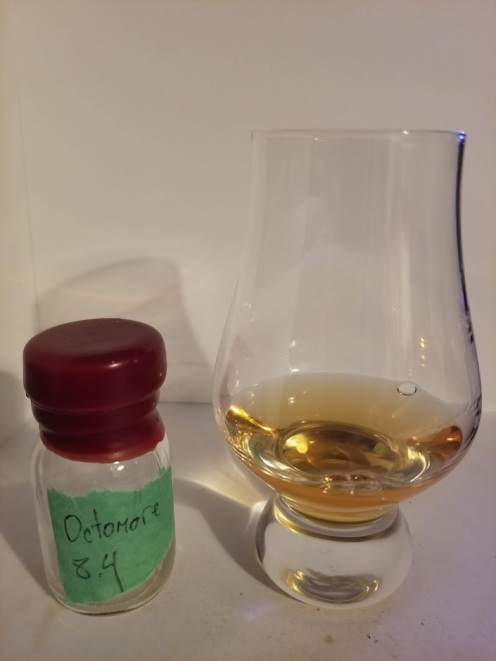 Thanks to /u/devoz for a sample of this.

Immediately this reminds me of a light roast coffee. Which I’m not a fan of… when it comes to my coffee. Seriously I want coffee flavours, not hot watermelon juice.

In my Scotch, on the other hand, I welcome it. Light fruity notes, followed by stone fruit and spice, maybe some oats, and then spice. Focused nose. Don’t know how this will play out.

Alright, this is a lot. The nose kept it’s secrets like Gandalf in the shire, the taste is like me after two gins at a psychiatrist’s office party. It just keeps coming. Unlike me in that situation this is delightful.

Lots of ginger and lemongrass, then some sour and peat notes. It’s like the brash virgin oak cask is able to hold back the monster peat notes. Or make a new monster. The “Hulk” method of balance, if you will.

Fruity, meaty, and spice. Now, this is what I want from my Octomore. This is the direct learning of previous drams put to work. Even has some funk. I love funk! Both the flavour and the music!

Conclusion: Use virgin oak casks, I think that’s what we’re learning with these older Octomores. Make them less boring with time as some of the peat leaves. Here we went in a new direction. It wasn’t just pork and Oreos. No, now it’s caramel, vanilla, herbal/earthy notes, fruit, and even some dried happy meats.

The nose is my only sticking point. While I’m not a nose freak like some, I don’t think it matches the rest of the brash ones before it. Octomore is like a new musical instrument, and we’re going through the shitty 80s where people aren’t using the good synthesizers and then Nine Inch Nails comes along and boom, the .4 series happens.

Confused yet? Good. What I’m saying is this is brash while still being interesting, and different enough to separate itself from the constant repetition of the standard offerings.