And finally I’ll stop posting all the SMWS whiskies I have…. traded for from the welcome kit.

What, you thought I had run out already? I have a problem people. And it’s called too many damn samples. And an utter need to write. And an unwavering devotion to the 15th century Pope.

Oh, wait, ignore that last one. It surprised even me.

So, do you know of Glen Grant? No? Well that probably means you’re not an Italian whisky drinker. And I don’t mean you have 1.3 Italian in you but don’t speak the language, and mostly grew up in the US.

I mean you were born and raised in Italy. Have an Italian passport. All those things. So if you’re that, and don’t just identify as one, guess what: You’ll know Glen Grant.

You’ll know it really well because Glen Grant is the number 1 selling whisky in Italy. So much so, Gruppo Campari owns them as their only whisky brand (as of 2006).

Suffice to say, as a Canadian, I’m not in the target market. I mean, sure I’m hairy and enjoy Italian food, but that’s about Italian as I get, as long as you avoid all the contract hits I take on the side.

That leads us to this whisky: SMWS 9.94 “Jam & Jerusalem”. This won’t be the oldest or more independent Glen Grant I’ve ever had, however it will be the most oddly named.

As someone who’s never attacked and eaten Jerusalem, I don’t know what flavours I should expect. Perhaps next time I lose control of my powers and grow large and fight other monsters on skyscrapers.

None the less, perhaps this way has less damage to people’s lives. And it has Jam. So let’s see how it tastes, shall we? 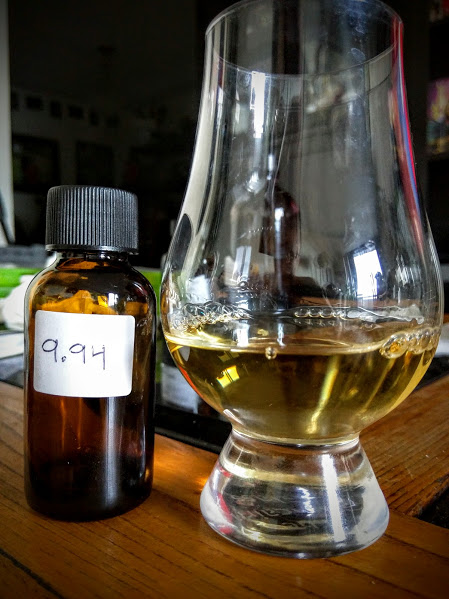 You know when you walk into a candle store and get to the scented candle section? Okay, this is like that, save it doesn’t make you giggle like an idiot if you huff it.

Or so I’ve heard. Well, I kinda giggled.

Lots of acid in this one as well. Nice, different nose.

This is kinda all over the place, but not in a good way. The different flavours don’t really jive for me.

It’s nice, just not my cup of tea unfortunately. Like some weird hybrid version of a salad here. Not a fan.

Quite hot, still has some of the nose to it, which I’m preferring. Nothing too over the top, however it all meshes a little bit better.

Makes me want to make an upside down cake.

Conclusion: Not a bad dram. Surprisingly simple considering the age and Abv, however I expect the cask was just too worn down. Kinda like I am when the AC doesn’t work, or I walk at all.

The nose promised an interesting, almost soap centric dram, and it didn’t really deliver that. Instead we ended up with a muddled taste and an okay finish. All in all, I’d skip this one, unless you’re a hardcore Glen Grant fan who has to have them all (aka Alcoholic).