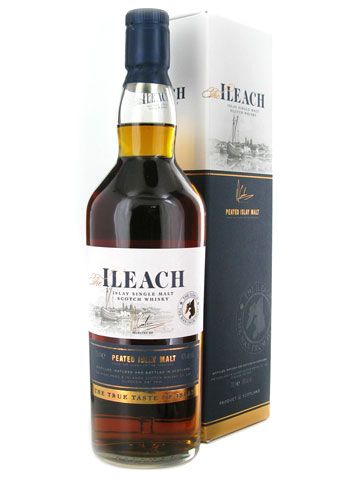 Thanks to /u/j4ni for this sample.

Myteries and Enigmas… wait, I already did that for the last whisky.

Uh, I have a nice hangover while writing this. Turns out dropping your caloric intake, having an eye freak-out caused by dust, and then diving into whisky the next day is not a good combination

So, who or what is the Ileach Peaty? Well let’s start off with the easy part: There is no distillery called the Ileach. Or the Peaty. Maybe the Pete-y, I didn’t check that far.

It’s made at one of the Islay distilleries who wish their name not be printed. And it’s bottled and distributed by Vintage Malt Whisky Company.

They have a website, not much information there. http://www.vintagemaltwhisky.com/ileach

So, it’s NAS, no idea what distillery, and we know it’s peated. It’s also inexpensive and has some rave reviews. Sounds fun, let’s see how it tastes, shall we?

Nice nose. I’m not even going to try and guess who makes this. I’m guessing not Bowmore. Maybe a younger, less peated Caol Ila? Okay, no more guesses.

There’s some youth to this, however decently complex for said youth. Like the old man and the sea. Wait, what? Fuck I’m tired.

Where’s my fish? I mean, this dram is more complex than I was expecting, and shows off in the nose category quite well for the Abv and presumed youth.

Similar to the taste. A muddled, salty finish (hello Ladies). Spice continues, but the whole thing is muddy and not that great.

Conclusion: So I think I know why this get rave reviews from critics. Simply put, it’s a really good nose and a not too revolting dram for $30. And honestly, I can’t argue it. I may rate it lower than them, but I think you need to look at the thought patterns.

If you’re going to buy something cheap, and want the best value for money, than this whisky is for you. I’m even considering trading for the 12 and the CS, just to see how it grows.

One thought on “The Ileach Peaty”