As we come upon St. Patrick’s Day, it’s that time of year where Irish Whiskies have a sudden surge in purchases.

I recently had the chance to have more and more Irish whiskies from the batch of samples that I bought on my trip to Ireland. Irish Whiskey is the one of the fastest growing whiskey’s in the whiskey world. It used to account for 60% of all whiskey sold, until a solid collection of bad events sunk the industry and the amount of distilleries.

Cooley, at one point, was for many years (24, it’s a lot to a New Worlder), the only independent Irish distillery. In 2011 Beam Suntory purchased them, and now they are part of the Kilbeggan Distilling Company.

So where does The Wild Geese come in? Well this brand of Irish Whiskey is,from what I can see, produced by the Avalon Group Inc. which sources the whiskey from Cooley and releases this separately from Beam Suntory. It’s specifically unpeated, double distilled, and aged only in ex-bourbon casks.

Why the name? Did someone just really, really like angry birds? No, it turns out that things predate current pop culture. I too, am shocked.

“Wild Geese” is a term to Irish gentry who fled to other counties in the early 1600s. What happened then? Well the English decided it was time to re-conquer Ireland, and we all know they of course did so in a humane and totally non-horrible way.

If you can’t tell, the above is sarcasm, and it was a bad time.

So there’s the history, and the idea. But what about the whiskey? Well there’s four in the Wild Geese Collection: The Classic Blend, The Rare Irish, the Limited Edition Fourth Centennial, and the Single Malt.

So let’s see how these tastes, shall we?

The Wild Geese Rare is the second malt into the whiskey. This blend is made up of single grain and single malt whiskies.

Cereal, stone fruit, and a very light nose. Takes some time, and eventually some vegetal elements show up instead of the cereal.

I guess that’s a bonus for some. It’s a very light nose.

Taste is nice; reminds me of a cheaper rum profile then a whiskey. Nice spice and molasses there.

The taste is certainly stronger than the nose. It’s simple, though nothing too rough.

The finish is where the whiskey begins, which can be confusing to a lesser mind. Thus I’m walking in circles.

I kid, I kid. There’s some heat and youth to the finish, however if you’re into a more mineral/dryness, then this may be for you. It has characteristics of some bourbons I’ve had.

Conclusion: This is very much a Frankenstein’s Monster of a whiskey. The nose is light, and very whisky like, the taste is sweet and rum like, and finally the finish reminds me of an entry-level bourbon.

All in all, I can’t fault it for any rough elements, save for the nose creating a vegetal funk. Suffice to say, it’s a nice dram, though I probably won’t be revisiting it, as I’d almost prefer to drink the specific ideas that went into it then it itself.

The Wild Geese Single Malt is up next. Rather than the others, this is not a blend, but rather the pure single malt from the line.

Interesting butter and roses on the nose. It’s stronger than the Rare above, with a tart apple note coming out, just a pinch of mint, and lots of floral elements.

So it’s cooked butter, and that’s quite inviting. With roses. So like me when I’m trying to be romantic but all I know is how to offer flowers and butter.

Okay, so we have some apple pie elements going on here. Some mineral to balance out the sweetness, things balance out, and some oak to show off the ex-bourbon casks.

All in all, nice to sip on. Again, nothing super complex, however the flavours pair together well.

Finish continues the whole apple pie thing. Yet adds some citrus and more of the mineral from before.

Wine drinkers who like a sweeter wine may see where this is going.

Conclusion: Gave you a second to guess: This whiskey is very similar to an oaked Riesling. And that’s not in any way a bad thing. Is it going to be the secret to all whiskies on the planet? No, however on a summer day it’s perfect to sip on.

So if your friends are all drinking wine and you don’t want to, may I suggest this whiskey to be on the same flavour profile, less they drive you out for being different, as expected with people.

The above was suppose to be a joke, and instead I just made myself sad. Let’s move on. 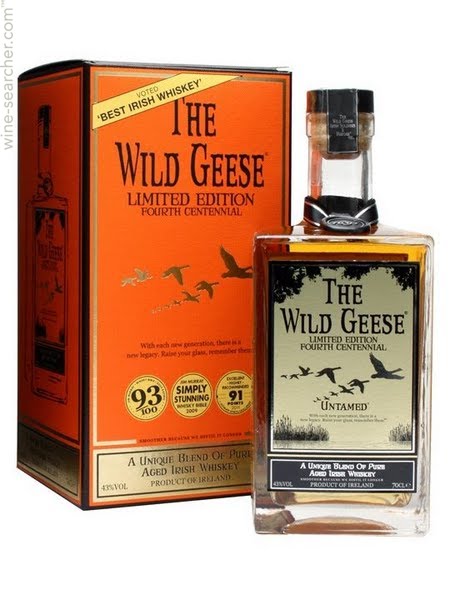 The Wild Geese Limited Edition Fourth Centennial is the rarest of the collection, being a blend of malt and grain whiskey. I am having some trouble finding much written about the Wild Geese collection, however I did find out that Jim Murray enjoyed this particular whiskey back in 2009, giving it a 93. Which if I remember correctly is an average rating for him.

Price: Not available at the LCBO

So if the others were apple pie, this goes for more of the floral, fruity and unfortunately chemical element.

If the others were without issues yet light, the nose here is strong and has some rough parts. I can see where they were going, however they may have hit a pothole along the way.

Closer floral elements, more caramel, and lacking the spice from previous elements. Granted if that turned you off, this may be up your alley.

Some brine and floral parts here are unique, though I don’t know if they work together. The plum is a nice aspect too.

Finish is the first time I’ve had that yeast element come out on these. If you were used to younger, lower Abv. “smooth” Irish whiskies that pop out in to the alcohol stores here in Canada, then you’d recognize it.

That said, it’s a bit more developed here, so I don’t mind it. The brine/floral and Smarties (Canadian version) though is a little much. That derails it quite a bit.

Conclusion: It’s not easy to rate this whiskey. I can certainly see why it received an average rating from Jim Murray. It’s certainly unique, though there’s rough edges. People could sip on it and enjoy it. Others may not.

I’m not loving it too much, is what I’m saying. Others may love it. There’s certainly some aspects that are more complex than the above two. I just don’t feel it all works together as well.