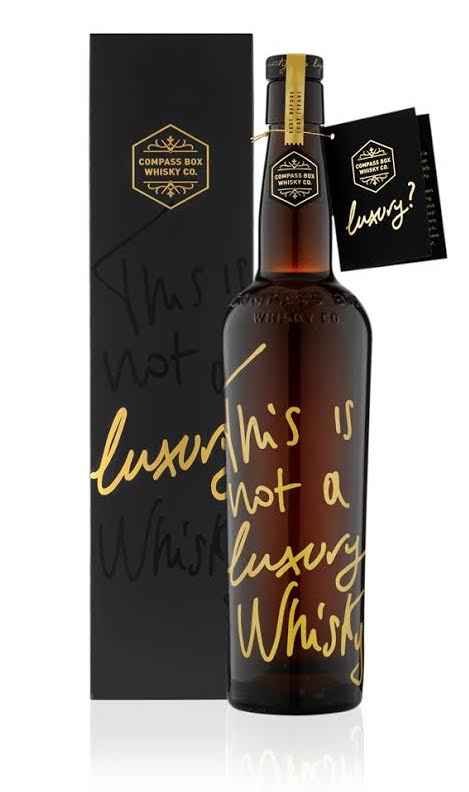 Thanks to /u/lvl1dramacenter for this sample.

Another high end Compass Box? So soon? Well I said I’d review these soon, and then… I buried the rest of my Compass Box samples in my sample hutch. Which is hard to search when you trade like a madman and don’t drink fast enough.

Poor me. Too much booze. Up next I’ll cry because my wife is too beautiful and I know how to bake chocolate desserts too well.

I’ll admit it: I nearly bought this whisky, sight unseen, and taste unseen. Which is a silly thing to do. Because you don’t know if you like what I like, unless you like the notes, and I don’t really know if I like what anyone likes, so I have to try it all.

So why did I want to buy Compass Box This is Not a Luxury Whisky without trying it first? Because a friend of mine introduced me to the painting “Ceci n’est pas un pipe” a year ago, and I loved it. It’s a really nice looking pipe. Granted he showed me it with a Super Mario pipe on his t-shirt, however that’s neither here nor there.

I liked the painting. This is whisky. I like what Compass Box do. Why shouldn’t I buy it?

Oh, how about the dollar is low, the economy is shit, I have rent to pay, and I was laid off 8 months ago (got a job after that) and this is a luxury item (granted it says otherwise).

So I balked and didn’t order it. Which is too bad, because once I found out what it was composed of, I wanted to buy it more

That’s a pretty cool vatting of whisky. Oh well, I was able to swap for a sample, so at least I can talk to it now. Maybe they’ll make another cool whisky design based on another artist I fumbled into and I’ll buy that one instead.

Let’s see how this one tastes, shall we?

Price: N/A at the LCBO (AKA This is not an Alcohol store)

Region: Blend (AKA This is not a vatting)

Wow. Just… wow. I knew there would be a pronounced amount of red fruit flavour. This smells exactly like meat cooked with cherry wood.

No, I don’t have a joke there, though off the cuff, maybe something about a stripper and her giant penis? I don’t really know.

Really loving the use of wood here to play on some flavours that may be too much. It balances them out, or pairs well with the sweetness.

More wood. More wood than I would want if I was polygamous and really into men rather didn’t just use it as a joke.

Yeah, I know I broke a few of your hearts there. Let’s get back to the whisky.

This is one of the few times I’ll enjoy tobacco flavour in something. I don’t know if it’s the pairing of spice, pepper, or even perfume, or maybe all three, but this is some nice flavour.

Spice. I love spice. Autumn is a wonderful time of year, if for no other reason than the slight chill and tons of spice.

They’re’s also a good amount of yoga pants too, but that’s a different review that I should keep to myself or as an alt on one of the creepier subreddits.

The older Caol Ila still shines through at the end. It’s interesting to see how little of an older, (seemingly) complex dram you need to make an impact, like a good role model.

Conclusion: A good role model, like Cherry up there with her smoked wood.

This dram is amazing. I know that people wanted me to temper the reviews on this, but I can’t. I just can’t. It’s well put together, interesting, and can only get better.

I feel like there could be more complexity, and I’m going to guess they hoped the older single grains would have wackier flavours. And while there were some good aspects (seriously, quince?) I think that maybe younger single malts could have given it an oomph.

Or perhaps it’s a different issue: Because it’s mostly Glen Ord, perhaps they should have gone for more of the others.

Who am I to say? Some dick on the internet. This is a good dram. One of the best I’ve had this year. And I think it’s a good purchase for the whole package.

One thought on “Compass Box This is Not a Luxury Whisky”